Nature around Zermatt in many ways reveals superlatives. The highest mountains in the range of the Alps, the highest tree line. And now it is official: The highest trees in Switzerland are in Zermatt. Pioneers, such as the Swiss stone pine and the larch. 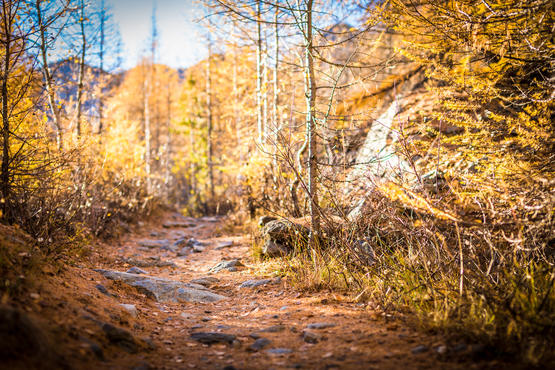 In the area of the Unterrothorn (3,103 m), stands what is likely the highest altitude tree in Switzerland. It is a tough, 11-centimetre tall Swiss stone pine. As a lonely pioneer, it grows at 2,765 m. This news was released by the Swiss Federal Institute for Forest, Snow and Landscape Research WSL in September 2015. A research group accompanied Urs-Beat Brändli recorded the trees in the logbook of the Swiss National Forest Inventory (LFI). Now, the researchers have found this mini-Swiss stone pine in a rock sheet on the Unterrothorn.

In the literature, there were indications in other valleys, which also revealed high-altitude trees, such as in the area around Saas Fee. But the researchers suspect that there are further very high altitude survival artists. Therefore, they are calling also on laypeople to report high-altitude trees (see the link at the bottom).

One More Pioneer in the Highest of Heights

Zermatt is always good for a surprise. For instance, the district forester from the Inner Nikolaital, Leo Jörger, discovered together with his wife Marianne a larch on 6 September 2015: “Purely by chance we saw a larch above the Lichenbrettersee below the mountain station at Trockener Steg. At 2,800 m!” This means a new record: “We will also report this discovery to the LFI,” said Jörger, who is also the mayor of the municipality of Randa.

Highest Forest Limit in the Alps

According to Jörger the upper Mattertal valley combines many factors, which make it possible for the vegetation to climb higher than in other areas. Therefore, the Zermatt area has the highest forest limit – it is at over 2,300 m – and defined as forest area with closed stock. This limit is not static: “In the past decades, it evolved and promoted itself constantly for higher altitudes,” says Leo Jörger. Within the last 50 years by up to 50 m. Individual trees even grow up to several hundred metres higher. The reasons for the highest limit forests:

When the pioneer trees, such as the Swiss stone pine, larch, birch and willow have once successfully germinated and grown at higher altitude, this does not mean that they will actually manage to grow to majestic sizes over many years. For example, a Swiss stone pine must become over 40 and even up to 90 years old until they have cones for the very first time. These pioneer trees can be swept away in an avalanche, get hit by rocks, die of thirst, freeze or be nibbled by wild animals. Larger trees can lose their lives through lightning. The fate of the pioneers can simply and very much can just be deformity or degeneration. Therefore, foresters often talk of the area above the tree line as the “deformity limit.”

The Eurasian Nutcracker, the Feathered Forester

The Eurasian nutcracker is a clever and intelligent corvid. So that it can eat the hazelnut-sized nuts of the Swiss stone pine, he pecks them out of the cones with his powerful beak. He flies away with up to 100 pine pips in his crop. Within a radius of up to 15 kilometres, he lays in larders for the winter. In this way, thousands of larders are created. The Eurasian nutcracker prefers hiding places, which are in clear locations and where the sun shines on them so that he can get to his buried food reserves on snow-free surfaces in winter. Since he forgets many of the hiding places, stone pines sprout there. Often they grow at distinctive locations at high altitude far above the tree line.

Through this, there are many Swiss stone pine trees to be seen from the village of Zermatt, and they thank their existence to the work of the Eurasian nutcracker. In the area of Schweifinen and the Schmid’sch Bäumje (the trees of Schmid) and on the Hubel area – both areas on the western mountains of Zermatt. When they germinate as triplets or quadruplets and have trunks grown together, it is certain that the nutcracker was at work. For example: Swiss stone pine groups along the hiking trail from Zmutt towards Hubel.

The Highest Altitude Tree in Switzerland (only in German)

The Swiss Stone Pine – the Queen of the Alps

The Nutcracker as Forester (only in German)

The Larch (in German or French)

The Birch (in German only)

The Willow (only in German)