Zermatt: the marmots are awake

Zermatt has a huge marmot population – ideal for families who like watching the cuddly rodents wake up from hibernation. With marmots eager to build their burrows close to human settlements, a short hike will get you to the perfect vantage points. 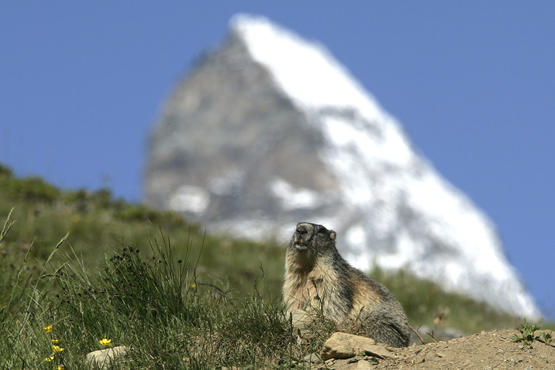 According to Zermatt legend, the marmots appear on St. Joseph’s Day (19 March). In April they are already less sleepy, exploring the spring environment and waiting for the first herbs, grasses and flowers to appear. In the past few weeks, they extracted themselves from the soft nest of hay inside their cavernous burrows and are now squinting in the glittering spring light. Their six-month hibernation is over. During that time, their body temperature cools down to 5 degree Celsius and their heartbeat slows to around 20 times a minute compared to 200 beats a minute in summer.

Approx. 1,000 marmots live in the vicinity of the Matterhorn village. Their numerous burrows are well visible from the hiking paths. Experts say that Zermatt has an excess population of marmots. Some are caught and resettled in other areas. Sometimes, the game keepers hunt marmots to control the population. In autumn, during the big game hunting season from mid-September to mid-October, the rodents also become fair game – albeit only in restricted areas where hikers are out of range.

Since marmots are clever little animals, they have moved their territories ever closer to human settlements – or the settlements have moved closer to them. This vicinity gives them a degree of protection against their natural enemies, such as foxes and eagles, who do not like to get close to humans.

Marmots, also referred to as “Murmunda” in Zermatt dialect, are part of the rodent family. When marmots call out to warn their colony around the burrow, they expose long yellow incisors. A marmot’s body is around 50 cm long and ends in a 15-cm tail. To help them dig their long tunnels, marmots have strong front paws with long claws.

Zermatt’s marmots are almost antropophilic, preferring to settle close to lifts, hiking paths, railways and villages. Visitors who come to watch the animals should refrain from feeding them. Dogs must be kept on a leash.

Zermatt’s Murmunda live close to Schwarzsee, on Gornergrat (Riffelberg, Riffelalp), at Findeln, at Hubel (Herbrigg area) and close to Furi. Zermatt also has a Marmot Trail which leads from Blauherd via Stellisee to Sunnegga (No. 8, 1h 10). Marmots have also set up camp along the Bahnweg between Täsch and Zermatt. The cute little animals can be seen from the lift between Zermatt and Furi and in the Schwarzsee area, as well as in other places. If you sit still and avoid sudden movements, you can watch the marmots’ family life unfolding in front of their burrows.