Helicopter Flights to the Summit of the Matterhorn

Helicopter round trips can be exciting. In Zermatt they are simply spectacular. The helicopter pilot and mountain guide, Simon Anthamatten, flies around the Matterhorn in 360° mode for the video community. 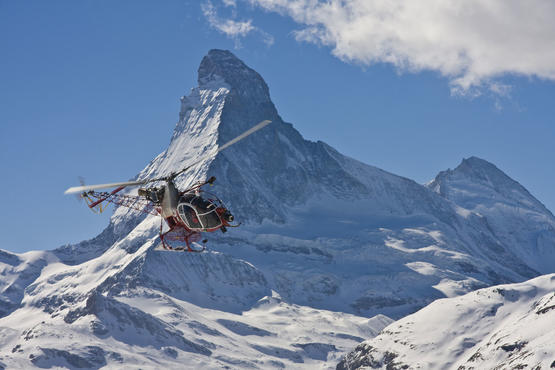 Seeing the Matterhorn just once up close is something everyone dreams of. Seeing it very closely is now possible with the 360° virtual reality video flight to the Matterhorn. At the controls is the helicopter pilot and mountain guide Simon Anthamatten from Zermatt. He has become famous around the world as a mountain climber and freerider.

The 360° video flight to the Matterhorn is the best way to start the dream. But the real world always awaits you with more. Air Zermatt is world famous: This helicopter company developed the modern concept of mountain rescue, the mountain rescue station in Zermatt is a model for the entire world and has been engaged in training mountain rescuers and high-altitude mountain helicopter pilots. Helicopter round trips are possible year-round in Zermatt.

And this is how it works

You can experience videos as a live view with the free BlickVR app for iPhone and Android devices. Special video recordings using multiple cameras make this possible. A spectacular video can be watched in the 360° mode on your smartphone. You can look around by swiping with your finger.