Remembering the first women to climb the Matterhorn

On Sunday 11 August 2019, a memorial was erected for the incredible mountain climbers Lucy Walker and Meta Brevoort: there are now bronze markers bearing their names on the Zermatt Walk of Climb. 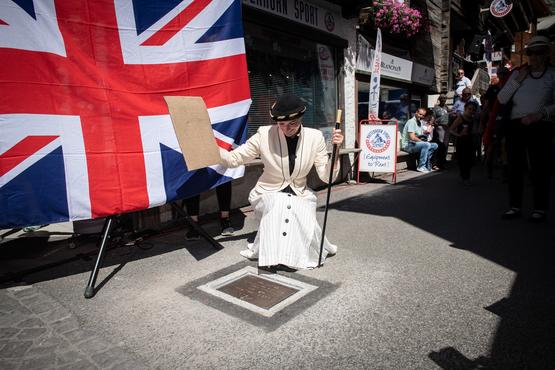 Hollywood has the Walk of Fame. Zermatt has the Walk of Climb. This honours alpinists’ incredible achievements. Previously, there were only men on the markers, but this changed on Sunday 11 August 2019, the year in which Zermatt – Matterhorn’s motto has been "Women on the mountain". Lucy Walker and Meta Brevoort were two truly astonishing mountain climbers. In 1871, Lucy Walker became the first woman to climb the Matterhorn. Meta Brevoort was the first woman to cross the Matterhorn to Breuil and back, also in 1871.

To honour them, the Zermatt – Matterhorn has installed two bronze plaques at the bottom of Bahnhofstrasse. The Walk of Climb now has eleven of these bronze markers. The new markers were unveiled as part of the Zermatt Folklore Festival celebrations. Lucy Walker and Meta Brevoort even put in a personal appearance – played by Corinne Thalmann and Nadine Summermatter, who are currently playing these roles at the Zermatt Open Air Theatre. It was the Zermatt Open Air Theatre which provided the impetus for the new markers.

Drama on the Riffelberg

In the play, "Matterhorn: No Ladies please!", the Zermatt Open Air Theatre tells the story of the first woman to climb the Matterhorn. The thrilling story focuses on women and takes an occasionally tongue-in-cheek look at a very topical issue: the equality of the sexes. The play is being performed on the Riffelberg until 1 September 2019.