Preparations for the Zurich–Zermatt one-day race are going at full speed. On 5 June 2019, some of the entrants and Olympic champion Fabian Cancellara tested the route. 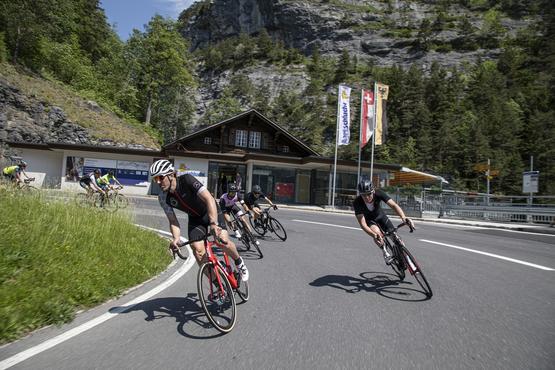 The Chasing Cancellara Zurich-Zermatt one-day road race will take place for the first time on 19 September 2019, with 500 participants riding more than 290 km and covering more than 7,500 m of ascent from Zurich via the Grimsel Pass to Zermatt.  Led by Olympic champion Fabian Cancellara, 15 participating journalists, influencers and invitees completed the middle section as part of the test run on Wednesday 5 June 2019. As the southern side of the Grimsel Pass road was closed due to high snowfall, the 100 km route went from Sursee, covering 3,500 metres of ascent, to just before the top of the Grimsel Pass. In addition to taking some fantastic photos and videos, the participants were also very positive about the new race format. "The test ride was a unique opportunity to advertise the race more widely to the community and put all the processes through their paces. The responses of the participants were all positive, even ecstatic," said Christian Ziörjen, Zermatt Tourismus Event Organiser. Currently, 354 out of the 500 places on the starting line have been filled, 61 of which are teams of two.

Chasing Cancellara Zurich-Zermatt kicks off the Traillove Alpine Mountain Bike Festival. As well as the Chasing Cancellara, the festival for all bike enthusiasts includes the final round of the Enduro World Series and the Traillove Derby, plus a wide range of festival activities offering something for everyone. There will be test and electric mountain bikes, gourmet tours, a bike & yoga camp, parties and activities for children and families.