World Premier of the Matterhorn Musical

The Matterhorn musical by Michael Kunze and Albert Hammond will have its world premier in the Theatre St.Gallen on Saturday, 17 February 2018. 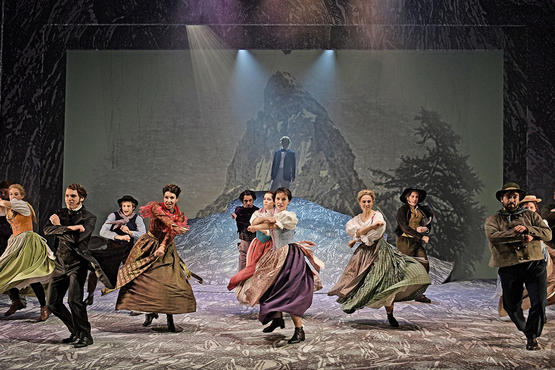 The Matterhorn musical about the first ascent of the most photographed mountain in the world will take place on the stage of the Theatre St.Gallen on Saturday, 17 February 2018. This work by Michael Kunze and Albert Hammond is more than just a musical about a mountain and mountain climbing. It deals with the very contemporary conflict between man and nature – and about human greed for success.

The musical follows the footsteps of the ambitious young Englishman, Edward Whymper, who managed to accomplish the impossible when he became the first person to reach the summit of the Matterhorn in the summer of 1865. Other works by Michael Kunze, including Rebecca and The Dance of the Vampires as well as the world premier of Don Camillo and Peppone, were performed at the Theatre St.Gallen. This is the first musical work for the composer, Albert Hammond.

The Theatre St.Gallen has a video blog, "Mattervlog". Here is a link to the blog with more information along with the schedule and tickets: Matterhorn Musical